Connected to the International Convention center, 2 miles from the airport, and 10 miles from Mercedes-Benz Stadium, the Atlanta Airport Marriott Gateway is one of Atlanta’s premier event hotels. When huge events come to town, the hotel sees a blitz of new guests and crowds in common areas. All this activity can leave behind odors — from cigarette smoke, food, and other sources — which can give bad impressions and lead to negative reviews.

For the weeks leading up to the NFL’s season-ending championship game between the New England Patriots and Los Angeles Rams, hosted in downtown Atlanta, the Marriott wanted to freshen up their rooms and common areas. To eliminate lingering odors from previous guests, the housekeeping crew drafted the Fresh Wave IAQ DVS45 mobile Vapor Phase delivery unit to their team. 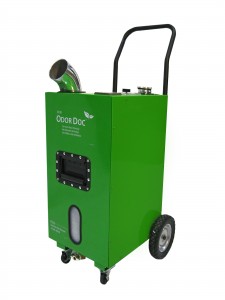 For mobile odor elimination, the DVS45 was designed to provide a moveable, “dry” system for application of Fresh Wave IAQ Air & Surface Liquid or Smoke Away Liquid. Dry vapor particles are pumped from this unit to neutralize odors from surfaces, air, carpets, upholstery, draperies, bedding, wallboard, and other areas. The unit’s castors, push bar, and lift handles allow for easy transport from one area to another — like hotel rooms, hallways, lobbies, and restrooms.

So far, the Marriott staff have been impressed with the results.

“[We] have truly enjoyed using the [DVS45] machine. It’s the best I have seen in my career,” says Carleen Lake, Rooms Operation Manager. “I will definitely share with others when I’m given the opportunity.”

Thanks to the DVS45, regardless of the results of the Big Game on Sunday, the guests of the Atlanta Airport Marriott are all winners.