One of the busiest event spaces in the U.S., the Orange County Convention Center in Orlando, Florida hosts over 200 conferences, conventions, and tradeshows each year. With over 7 million square feet over numerous buildings – including 300 meeting rooms; a ballroom, lecture hall, and theater; loading docks and food courts – the facility can be as bustling as a small city.

Underneath these buildings, a network of service tunnels hide the inner workings of the OCCC’s plumbing, electrical, HVAC, and other equipment. The odors generated by wastewater, garbage, and food handling that run through these networks can be a nuisance for maintenance staff. They can also seep into conference rooms and common areas, causing potential complaints from the OCCC’s more than 1.4 million yearly visitors.

Two specific tunnels, located under the south and north concourses, house drains where grease, gray water, and decomposed food is disposed from the busy kitchens. Odors collect around the waste pipes and drain, causing an uncomfortable working environment and source of smells that could affect the experience of convention attendees.

The OCCC was hiring a service to apply a scented product in the drainage areas to mask the odor. This required significant investment in the regular service visits and the product itself. In addition, the smells were not eliminated – just covered up by a misted fragrance – and the unpleasant odors lingered.

Through a partnership with Grainger, Fresh Wave IAQ did a site visit and recommended our innovative Dry Vapor System (DVS) equipment to eliminate the drainage odors. The mobile DVS45 was placed in the south tunnel and a stationary DVS65 in the north tunnel. Both continually disperse Fresh Wave IAQ Air & Surface liquid around the affected locations, including walls and floors. Additionally, 1-gallon odor eliminating Gel pails were placed near the drain grates and inserted into air ducts and air returns to prevent odors from escaping into the Center’s public areas.

Fresh Wave IAQ’s natural ingredients is consistent with the OCCC’s commitment to increased sustainability practices. The Center is one of the nation’s leaders in sustainability stewardship, including its initiatives for saving water, recycling materials, renewing energy, and composting food. 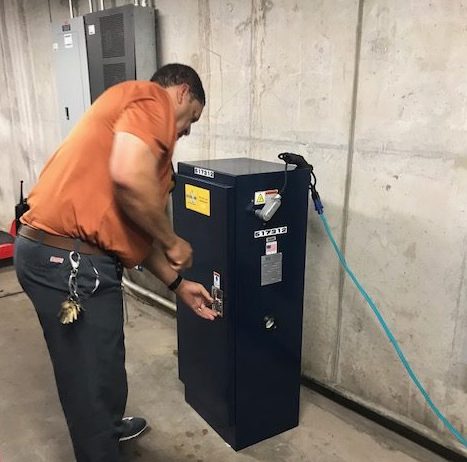 The DVS equipment immediately mitigated the tunnel odors. After a two-week trial period, the OCCC’s staff was satisfied and ordered all recommended solutions. They are currently exploring the use of odor eliminating Gels in public restrooms.

“[All the smells] appears to be getting eliminated to the point where there’s going to be zero odor in here,” said Virgil Postell, Warehouse Supervisor of Facility Operations Division.

“I am very impressed with the [dry] vapor machine,” adds Postell. “It’s doing a great job. I recommend it to any institute that may be going through issues with odor.”

Find out how to buy Fresh Wave IAQ, through our U.S. and international partners.